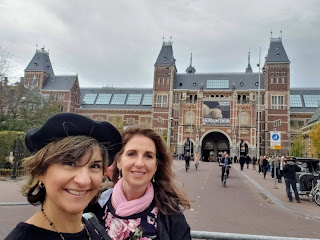 There were a couple of things we didn't want to miss before Karen's plane to tel Aviv. She asked to see Spinoza. I, Operation Night Watch. The logistics on how to accomplish this on the same day of her departure were somehow tricky, to me. Good news is we pulled it together. We decided to take the train to Schipol, leave her luggage in lockers, and then go to Amsterdam for the day since her plane was late at night. My sweetheart had said, because he is a big catastrophe foreseer, that leaving the luggage at the airport was better than at Amsterdam Central. His prediction was, "Amsterdam is a busy place. What if you can't find a locker? Better at the airport." Then life happens. We were on the train to Amsterdam Central. If we wanted to go to the airport, we had to change trains in Utrecht. We decided against it. We'll just go directly to Amsterdam Central, find a locker and voila! And voila my darling was right. THERE WERE NO EMPTY LOCKERS THE SIZE WE NEEDED. Oh boy, and we weren't the only ones. After 10 minutes of panicking, I not Karen, we found an empty one which wasn't working properly. As efficient as she is, she got someone from the main office and voila! Problem solved. After 7 euros for a small locker and 10 for a big one, we began our journey in the streets of Amsterdam.

We started at the Red District, ending up by the Saturday market. Karen decided there we could find some snacks: fresh bread and yummy pumpkin cheese.

Karen had talked about Spinoza's controversial ideas on God and religion during our car ride to Koblenz. For the ones who don't know him, he was a Dutch Jewish philosopher from the Dutch Golden Age (same as Rembrandt's), misunderstood by his contemporaries and even some others still today. He saw God as nature, in nature and the universe. He can be found everywhere, not within a temple, praying. He reasoned God was someone who neither judged nor punished, but reason and truth. The ones already familiar with Spinoza are acquainted with Einstein's thoughts on him. Like Einstein's response to New York's Rabbi Herbert S. Goldstein when he asked if he believed in God, to what he responded, "I believe in Spinoza's God, Who reveals Himself in the lawful harmony of the world, not in a God Who concerns Himself with the fate and the doings of mankind." 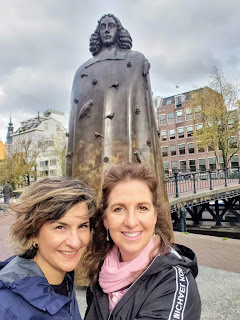 Once having paid due respect to Spinoza, we headed for the Rijksmuseum. Operation Night Watch is going on and I didn't want to miss it. For those unfamiliar with some facts about this masterpiece by Rembrandt, here are three facts:

1. Night Watch isn't actually called Night Watch. Its official name is Officers and other civic guardsmen of District II in Amsterdam, under the command of Captain Frans Banninck Cocq and Lieutenant Willem van Ruytenburch. Now, there are two interesting facts I learned from the expert on-site.

2. Operation Night Watch is more of a research endeavor than a restoration.
We were told they were trying to understand more of the painting using the technology that wasn't available in 1975 when last restored. For example, they just discovered missing feathers. Yes, missing feathers. The newly scanned image shows this helmet with some feathers on top. (The expert on-site can show you this on his iPad.)

3. Night Watch has been stabbed twice, 1911 and 1975, and sprayed with acid in 1990. Of course, let's not forget that during World War II, it was evacuated from the Rijksmuseum and hidden in a cave for several years.


Knowing a little more about it, how could one not want to see and admire this work of art? If you're curious to learn more about its meaning and history, I suggest you explore the following links:

After 4 blog posts and lots of patience on your part, we've come to the end of Karen's visit. Thanks for sharing the adventure with us and... 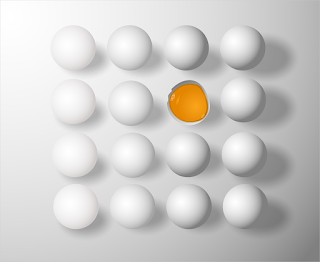 The question is: Why do people keep buying brown eggs even when they are more expensive than white ones? Maybe you already know, but I had no idea! Last Monday at Dutch school, my classmates and I finally learned the answer to this spooky question!
How did the teacher introduce the topic? By watching an educational show on Schooltv, Wat is het verschil tussen witte en bruine eieren?
Which eggs are more expensive? Brown eggs.
Which eggs are the most sold in the supermarkets? Brown eggs.
Where lies the secret of the egg's color? In the chicken's earlobe! In de kleur van de kip oorlelletje!
What?! Yes. If the earlobe is red, brown eggs. If it's white, white it is!
Is the quality different between the two? No. It's exactly the same. Identiek.
Why, then, are brown ones more popular? In the past, chickens were usually kept in battery cages,legbatterijen. Because of their grotesqueness, most Dutch people decided to switch to free…
Read more 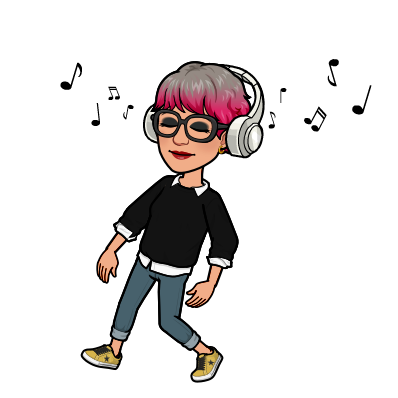